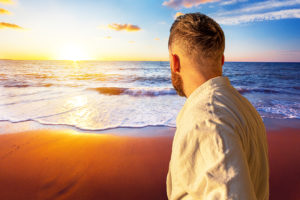 Favorite things: My family, peace and quiet, The seaside, Sunrises!

Dislikes: People who expect everything but are not willing to do anything for it! Sprouts

Andy spent his early life living next to the sea on the Kent, U.K. coast where he enjoyed school summer holidays on the beach and the sea. It is little wonder then that with his love of music, he was drawn to the world of off-shore radio where eventually he was able to combine both worlds. In early 1985 Andy came aboard the MV Peace ship and like the other DJ’s there, he was tasked with presenting many different shows to ‘keep the station on air’.

Eventually Andy left and returned to the UK where he continued with hospital radio and started up his own DJ business around the South-East area of England and also worked with his father in the family business.

It wasn’t until 2010 when Andy reconnected with the Voice of Peace and started broadcasting again. He says, ‘It was quite by accident that I found the station again. I was reminiscing and looking for some pictures when I heard the station was on air and I could choose a track off the play list! I did and then sent an email saying about all the good times I had as a DJ on board and that it was good to hear that they were back. Yaniv replied and asked if I would like to consider doing a show some time with them. I did and haven’t looked back.’

Andy says although he enjoys almost all types of music as he was growing up in the late 70’s and the 80’s, the memories that music holds for him makes the music of that time his personal choice if having choose.