Get Intouch with Chris 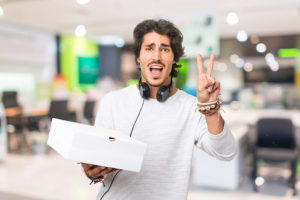 Favorite Music: All things Alternate! A 80’s U2, The Smiths, The Cure, R.E.M. die hard fan…. to today A Killers fanatic

Our heavenly anchor, or so he thinks! Chris Williams was Breast fed at the beginning of the 70’s on the dream of the mega stations. Brought up in southern Ireland where pirate radio was rife. Chris shadowed his uncle Billy a self made Irish Tom Jones around the disco halls of a forgotten generation when 8×8 flashing lights were the icing on a jock’s proud build. This led to an apprenticeship on local radio for most of his teenage years through radio’s pop socks Eighties until eventually he traveled further afield to jock on some of the worlds legendary off shore National & International stations .

A customary 6 month tour on Our Voice of Peace aboard our Peace Ship,to entrenching on western Europe at Contact 94 in Normandy. A brief spell with the French service of RTL’s Radio Luxembourg. Chris and radio had a separation for too long. Often described by many as a young Terry Wogan, Williams and radio would re- kindle their relationship with the brief toying with a internet radio venture. This led to a daily breakfast FM slot with Nova on Spain’s eastern seaboard. And now we can be exposed to his velvet chocolate tones on our legendary Kol Ha Shalom.

Williams, now in his 4th decade, embraces adulthood with an explosive return to radio propagation and our historic offshore transmissions. His Alma Mater, the Voice of Peace had to be the station of choice with his love for all things Radio. He stepped back on board in 2012 and quickly became a firm favorite with die hard VOP fans and new listeners alike. Initially broadcasting a 4 hour Saturday morning show and the cult new wave show, “Waveform” midweek LIVE, it was clear we had to nail Williams to the ranks of our daily presenters. Currently Chris brings us a daily show called “Lunch Box”, Sunday through Friday 1300 to 1500 Israeli Time. We think the right Captain is aboard our Peace Ship.