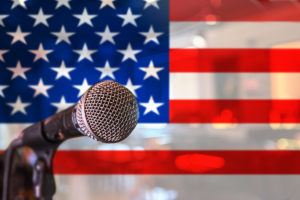 Richard grew up in a town called Woodcliff Lake, New Jersey located in the Northeast of the United States of America.

Richard started his life in the entertainment business, working behind the camera back in 1982, as a Production Assistant on a Boys Club of America PSA featuring Sylvester Stallone.  He later became a DJ at WCWP, as part of their extremely popular Rock ‘n Roll Weekend team.  He would follow that experience with a trip to Israel and a stint on the Peace Ship… serving as a DJ on the world famous Voice of Peace.

In 1993, after the Peace Ship was scuttled… Richard bought the domain ‘voiceofpeace.com’ and has been a supporter of VOP related events and projects ever since.

In 1994, Richard returned to Israel to work for the Israeli Broadcasting Authority, CNN and Reuters… and to write his project ‘Mellow Dramatic’.

After a few years he returned to the United States and married. Since then, Richard has written and produced thousands of videos, radio shows and events. He enjoys writing scripts, finding talent, creating theme-based video modules, and producing on-location. All around the world, Richard can be found behind the camera, conducting interviews, collecting coverage or at the director’s table, running the show.

Recently, Richard formed the Voice of Peace Network which is an official non-profit organization that helps create activism and awareness through education and entertainment, via multi-media production and the Internet… all in support of worthy “people helping people” non-profits.  VOPN reaches millions of people in over 170 countries and expanding.

Through VOPN, Richard works in partnership with The Voice of Peace radio station and is the North American Continent station manager for ‘The America Take-Over’ which happens six days a week between 1am – 6am in the Middle East.

Richard is truly proud to be part of the Voice of Peace team and hopes that you enjoy his shows on this important broadcasting network.