Get Intouch with Yishai 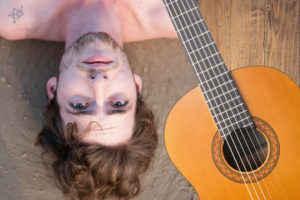 Favorite Music: Soul, Rock, Indie, Ambient, everything that opens the heart or really makes you shake your booty.

Favorite Things: Family, Music, Cooking for someone else 🙂 , Arts and all its forms, Morning coffee,Yoga  and Gardening.

Dislike: Being Late, getting yelled at and the inescapable shame after eating a McDonalds.

Yishai was born and raised at Kibbutz Sde Boker, located at the southern regions of Israel.
Yishai has a unique roots, as his dad comes from Zimbabwe and his mom comes from Chile.

He started learning guitar when he was 10, wrote his first song, than a year after at 2008 joined the regional councils young rock band as a lead guitarist, at 2010 Yishai started the a new band and named it “Sand Band”.

At the age of 16 Yishai was at grade 11 and decided to quit school, move out and leave with his dad. with a dream of starting to establish a music career, within few days he started writing and singing his own material.

All good and arts are blessed in this harsh world, Yishai worked at what job he had in order to sustain himself completely and not to rely on his parents to support him.

Yishai kept developing his singing and writing skills and released his first single “Shame Girl”  on the 17th of Nov with the stage name BYRD ,giving us a taste from his upcoming album.

BYRD Started broadcasting his show “Byrdmode” on VOP Radio on the 17th of January,  a slot for the 15 Pm Thursday broadcast was open and after they heard his single, they decided to take him as their new broadcaster.

Evolving as a young artist after three different bands, Yishai has put together his new Dream Team called “Byrd flying with The Pack”, including his acapella group “The Sunshine Trio “ from his solo gigs, Jan Nissimov as a bass Player and Kai Aroyo as a drummer.